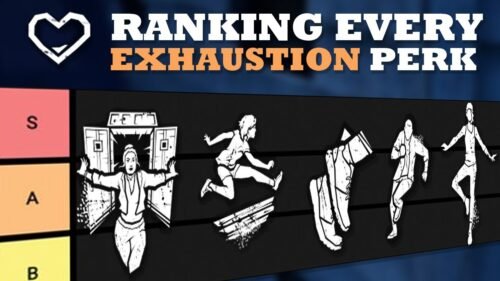 Ranking survivors’ best options in a chase, the exhaustion perks: Head On, Lithe, Sprint Burst, Dead Hard and Balanced Landing. I’m basing this on a bit of a mix of how they feel to use in game right now (as of Patch 3.4 – December 2019), and how fun they are to use. But just keep in mind that this is just for fun, it’s MY list and it’s completely biased :^). ALSO, I didn’t include Adrenaline on this list but looking back I think I should have. More on that below

I completely spaced when I was making this list and forgot to include Adrenaline. When I was recording this I was only thinking about the exhaustion perks that you personally activate while in chases, but technically Adrenaline is also a perk that triggers exhaustion (even though you get the perk’s effects even if you were exhausted when it activated). I would personally put Adrenaline in S tier because it’s a free health state PLUS a nice speed boost at the end of the game which is really clutch. Sorry that I don’t mention it in the video!

I also stream on Twitch:
https://www.twitch.tv/yerv